Mochi-Tsuki 2016 is over, our 52nd year at the MBT. More correctly, we were still the MBC (Midwest Buddhist Church) in that first year:1965.
Over the recent years, we evolved to a standard model of 450 pounds (dry weight) mochi gome and a duration of 4½ hours (not including the 3-hour preparation the day before. Also new, the “big” Mochi-Tsuki preceded the Dharma School’s “mini” Mochi-Tsuki (see page 9) by a day rather than several weeks, saving hours of setup and teardown time.

Hours before the majority of folks arrive to pound and make balls of mochi, a few individuals arrived to light the fires for water to steam. From 6 am, they worked in a quiet kitchen. Others checked to make sure the heavy stone usu (mortar) had warmed enough from the electric heater wires overnight. A cold stone would not work as the hot steamed rice would cool and stick.

Weather is always a concern as we have no rain date. While there was a 1½-inch snowfall the night before, the forecast called for something worse and that may have contributed to a smaller than usual attendance.

One encouraging difference, however, was the attendance of more younger people. In fact, we may have had more willing younger folks than immediate jobs. The majority of the rice-steaming crew were of the Yonsei generation, and I can see them taking over someday soon.

Same for those making the mochi cakes and working the adjacent staging table where mochi cools and plates are assembled for distribution. That includes a one-per-family complimentary plate for helpers and sales. In addition, larger cakes are made for the hondo’s altar offering and the mini mochi for ozoni at the New Year’s morning service.

Mochi-Tsuki is an annual cultural event where members, family, relatives and friends gather to not only work but also connect with each other and a part of old Japan.

This year, our efforts (and mochi makers!) were featured on the Travels in Translation blog (travelsintranslation.com). The blog is written by Beth Williams, “an East Asia expert who’s spent the past three years living between Japan and Hong Kong– soaking up their cultures.”
Writes Beth: “Since it is a bit of a dying art, you can imagine my excitement when I learned that the Midwest Buddhist Temple holds their own traditional mochitsuki festival each December right here in Chicago.

“I never even got to experience this when I lived in Japan, so of course I went out and spent the day learning all about this traditional practice!”

It looks as though, Beth, like everyone else, enjoyed the day—and the mochi. [Note: She even taught the Bulletin editor a thing or two. Did you know that the person who bravely turns over the mochi in between the fall of pounding mallets is called the kaeshi-te? And that the group doing the pounded is called tsuki-te?

View some great photos of this year’s Mochi-Tuski:

Peter Drechsler has provided these beautiful photographs (click any photo to view the slideshow)- please enjoy! 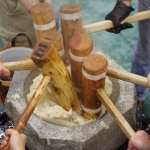 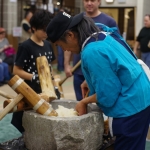 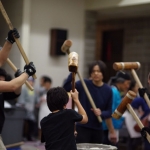 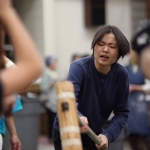 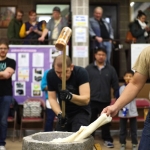 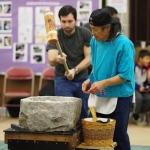 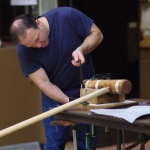 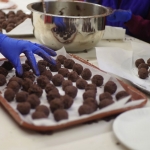 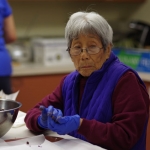 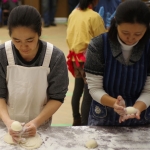 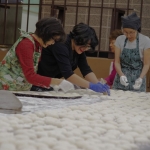 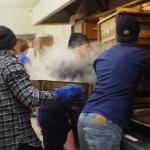 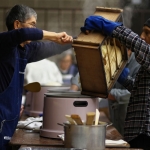 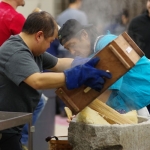 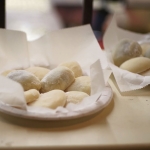