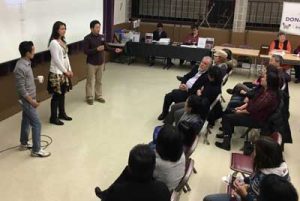 Kazuko Golden, producer of “A Song For Manzanar,” joins Jason Matsumoto, left, and Eugene Park, producers of “The Orange Story.”

A trilogy of films relating to the incarceration of Japanese-Americans during World War II made its Chicago premiere before a diverse crowd of 300 gathered at the Chicago Cultural Center on Dec. 2 and, two days later, was screened at the Midwest Buddhist Temple for 125 members and friends.

At the Cultural Center, MBT’s own Jason Matsumoto introduced “The Orange Story,” an 18-minute fictional narrative brought to life by Jason and fellow producer Eugene Park. As the program stated, “Koji Oshima is the proud owner of a small corner grocery store but must now abandon everything and report to an assembly center en route to a more permanent confinement site. His belongings, his business—everything must be sold except for what he can carry in one large duffle bag.”

Jason’s Nisei grandparents, Ben and Kiyo Chikaraishi and Kats and Yoko Matsumoto, were incarcerated in the internment camps before settling in Chicago where they became active members of the Midwest Buddhist Temple.

Jason met Eugene at our annual Ginza Holiday Festival and they collaborated on another project, which then led to “The Orange Story.”

Two other films were also shown at the Cultural Center premiere: “A Song for Manzanar” and “Tadaima.” Together with “The Orange Story,” these films followed the timeline from the issuance of Executive Order 9066, which resulted in the relocation, through life in the camps and to the internees’ return home. Although independently produced, these films—collectively called ”Hidden Histories”—offered a concise, emotional glimpse into the events around the wartime incarceration of 120,000 Japanese and Japanese-Americans. The Cultural Center program concluded with a thought-provoking panel discussion and audience questions. 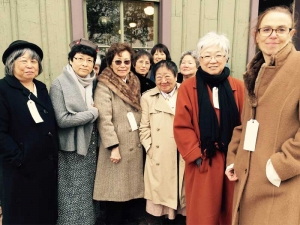 The Dec. 4 screening at MBT was a unique opportunity for temple members and friends, and also Jason and Eugene’s way of thanking MBT for its support throughout the production of “The Orange Story.” Some of our members, such as Jeanne Toguri and Jean Inouye, got to be a part of the filming as extras and see themselves on screen.

Before the presentation, attendees enjoyed a simple lunch of shoyu weenies, rice and salad, symbolic of the simplicity of an internment camp meal. Thanks to Jeanne Toguri, Dan Peterson, Rich Taura and others for cooking and serving.

The honored guests at the showing were 18 of our Nisei members who braved the season’s first snow to attend. They were joined by family members of Nisei who have passed or could not be present. The presence of the Nisei was a powerful reminder of the importance these films have in educating others on the incarceration of Japanese-Americans and the lessons to be learned.

Also attending was Kazuko Golden who produced “A Song For Manzanar,” which is based on a book being written by her mother who was born in Manzanar. Yosh Golden shared how she attended Japanese Language School at MBT with our founding minister, Rev. Gyodo Kono.

At the program’s end, the audience had a newfound appreciation for the hardships endured by the Issei and Nisei. It is truly remarkable how they persevered through the internment, went on to rebuild their lives and provided such opportunities for their children and grandchildren. Many thanks to Jason, Eugene and Full Spectrum Features for creating “The Orange Story,” which is definitely an important and memorable film.

You can get more information about “The Orange Story” at fullspectrumfeatures.com/the-orange-story/. The film is being used together with online content to enable educators and others to help share the story of the internment.

Chicagoans got another opportunity to take in a different perspective on the incarceration and some of the little-discussed ramifications on the lives of those interned when a recording of George Takei’s Broadway musical “Allegiance” was shown in a one-night-only broadcast at select movie theaters on Dec. 13.

“Allegiance” is a musical set during the Japanese-American internment that was inspired by the personal experiences of Takei. It follows the Kimura family in the years following the attack on Pearl Harbor, as they are forced to leave their farm in Salinas, Calif., and are sent to the Heart Mountain internment camp in Wyoming.

The musical began development in 2008 and premiered in September 2012 in San Diego. It played on Broadway from October 2015 to February 2016.
“Allegiance,” along with “The Orange Story,” “Song for Manzanar” and “Tadaima,” provided invaluable opportunities to not only educate and enlighten but also to spark memories and open communication between the Nisei and their children and grandchildren about this historic time that never should have happened. And never should again.