Gratitude for a lovely visit from BCA bishop 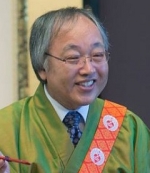 Rev. Kodo Umezu made his first official visit to the Midwest Buddhist Temple and Chicago as the 14th bishop of the Buddhist Churches of America in mid-November.

Sensei arrived late on Friday, Nov. 14, just in time for Chicago’s first taste of winter. Originally from balmy Fukuoka in Kyushu, Japan, sensei has spent most of his time in sunny California so the 20-degree weather was a bit of a shock.

On Saturday, sensei led a workshop for our Minister’s Assistants (MAs). MBT is fortunate to have these lay leaders who assist Rev. Ron Miyamura, sharing Dharma talks and helping with other religious activities. Joining our current six MAs are six candidates who have been studying under Rev. Ron for two to three years. Following the workshop, the group enjoyed a hearty dinner of deep-dish Chicago pizza.

On Sunday morning, the ringing of the kansho (bell) signaled the start of the Eitaikyo (Perpetual Memorial) Service. Reverends Umzeu and Miyamura entered the hondo (chapel), followed by three of the curent MAs and the six new candidates. The group chanted Sanbujo (Three Respective Callings).

As he introduced the guest speaker, Rev. Ron shared how he had first met Umezu sensei when they were in Japan in 1973. Sensei Umezu moved from his native Japan and started his ministry at the Fresno Betsuin, then enlisted in the U.S. Navy, served at the Los Angeles Betsuin and Buddhist Church of Oakland, before being named executive assistant to Bishop Watanabe. He was the director of the Center for Buddhist Education in Berkeley, and became the bishop on April 1, 2012.
Rev. Umezu expressed delight at seeing snow for the first time in five years. He then gave a wonderful Dharma talk in which he explained the importance of the Eitaikyo service and paying tribute to our ancestors and founders of the temple, who made it possible to hear the Teachings of the Buddha. He also reminded us that it is not happiness that leads us to the Truth, but that the Truth leads us to happiness.

Following the service, Rev. Ron introduced the Kie Shiki ceremony (Sarana Affirmation). This is a time for Jodo Shinshu Buddhists who aspire to lead the Buddhist way of life to affirm their entry onto the Path of Nembutsu. By appearing before the shrine of Amida Buddha and taking refuge in the Three Treasures (Buddha, Dharma and Sangha), they pledge to live the Buddhist way of life. This ceremony is only officiated by the Monshu or the Bishop and was last held at MBT in 2012.

A homyo (Buddhist name) was given to each of the 15 participants, acknowledging their indication to aspire for the Truth. Rev. Umezu pointed out that each homyo is three characters, with the first being Shaku which is the clan to which Shakyamuni Buddha belonged. And so, he said, we all become brothers and sisters within the Buddhist community.
Umezu sensei then reminded us that saying you are a Buddhist does not make you a Buddhist. In fact, the goal is to live a life of harmony and appreciation, and not be focused on being Buddhist versus non-Buddhist.

The service concluded with Umezu sensei bestowing the title of Minister’s Assistant to: Sandra Myo-I Adams, Melissa Shin-I Maslanka, Cynthia Ko-Za Mee, Dan Shin-Jo Peterson, Jesse Bo-Zen Zavala and Joy Myo-Kyo Zavala. They join our current assistants: Terry Cichocki, Dave Duerkop, Susan Gilkey, Ray Kayano, Kay Schroeter and Roger Suekama. As Minister’s Assistants, they are certified to sit in the naijin (inner altar area) and conduct services under Rev. Miyamura’s supervision. In his message, Umezu sensei reminded the Minister’s Assistants that “mini” is part of their new title. Rather than view this as an accomplishment deserving more recognition, their role is to make themselves “small” as they serve the temple. The Minister’s Assistants help not only MBT but also others in the Eastern District as they allow Rev. Ron the time needed to carry out his duties to the Twin Cities Buddhist Association, Cleveland Buddhist Temple and Buddhist Churches of America. The Sangha (temple members) congratulate the Minister’s Assistants and thank them for their dedication.

The day concluded with the Women’s Association coordinating a delicious pot-luck luncheon where MBT friends shared their favorite dishes. After second and third servings, there was still plenty to send home. Sitting with Board President Rick Morimoto, Umezu sensei commented how the day was a joyous one for MBT, as it was a clear signal that the temple’s future is bright and strong.
We thank Umezu sensei for taking the time from his busy schedule to travel to Chicago. Although his visit was brief, his words will stay with us for a long time.

FacebookPinterestEmail
We use a podcast library service to publish our Dharma Talks here and on iTunes. If you are interested in past talks you can browse our Dharma Talk Archive.