The Midwest Minyo Group was formed in 1965 as an informal club looking to enjoy traditional Japanese folk dances.

The first instructor was Tom Saito, followed by Tsutomu Matsuda, who made his first visit from Tokyo in 1968. Matsuda Sensei was an accomplished Minyo master and founder of the Nippon Genchi Minyo Hoson Kai, dedicated to the preservation of traditional regional folk dances. He was also president of a Minyo association with more than 25,000 members. Sensei continued to travel to Chicago for many years, bringing new dances with him. In 1981, Michi Ichikawa was presented with a teaching certificate from Matsuda Sensei, which allowed her to carry on the Minyo tradition at MBT.

The Minyo group has danced at countless community festivals in Chicago, Wisconsin, Minnesota, Indiana and Missouri. One of the highlights was dancing in Washington, DC, as part of the Smithsonian Institution’s Festival of American Folk Life in 1976.

Over the years, 70 members have donned their yukata and shared in the joy that is Minyo. On October 30th, 24 members, along with 42 family members and over 60 Sangha members joined together to celebrate their 50th Anniversary. A delicious lunch of Thai food was served and a wonderful slide show created by Harumi and Carl Ichikawa showcasing 50 years of dancing was shown. Words of appreciation were shared by Dan Petersen and Rev. Ron followed by a reading of a story written by Michi Ichikawa. “Minyo Fantasy Diary” was read by Anne Shimojima who also presented a token of appreciation from the Minyo group to Michi for her dedication and support. The afternoon of celebrating and reminiscing concluded with everyone dancing Tanko Bushi. Congratulations on your Golden Anniversary! 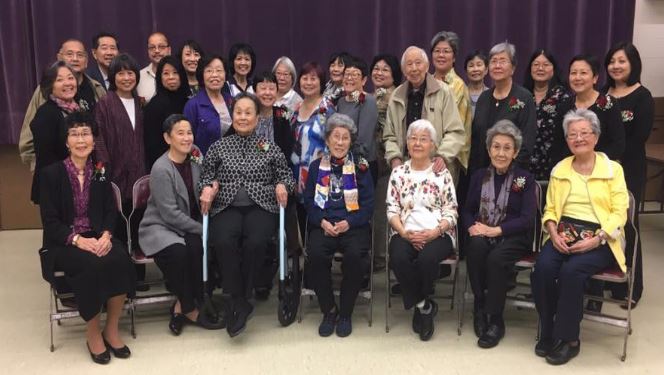 Many past Minyo dancers (shown here with current members) were among the dozens of Sangha members gathered for the 50th anniversary celebration.