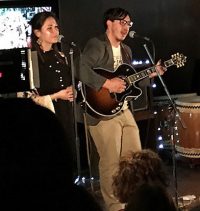 (UPDATE: Get Tickets by clicking this link) No-No Boy’s work might best be described as an audiovisual soundtrack of the Asian American experience. This multimedia project of music and archival images, spearheaded by former indie rocker Julian Saporiti and vocalist Erin Aoyama, takes us on a journey to the stories of our parents, our ancestors and ourselves in ways that we haven’t yet experienced.

The two Brown University doctoral students busk their way through the minefields of personal and community history armed with scholarship and creativity to carry forward the discussion around loss, resilience and identity.

And they’ll be bringing all of this to MBT for a performance with Ho Etsu Taiko on Saturday, Sept. 29.

Saporiti’s use of folk music reflects his Nashville upbringing and creates nostalgia for a history that feels familiar yet is deeply personal, complicated and undiscovered by many. Drawing from extensive scholarship, interviews and their own family histories of Japanese American internment, Vietnam War displacement and identity, Saporiti and Aoyama draw the listener in, create a space where Asian American stories are shared and make connections to issues of today that resonate far beyond the Asian American community.

No-No Boy brings expansive global history into a human scale, often focusing on an individual’s story to communicate a broader, sweeping narrative. In the song “Boat People,” Saporiti sentimentally alludes to his own family’s refugee saga from Vietnam to the west and appeals for action in dealing with today’s refugee crisis. Meanwhile, in “Two Candles Dancing in the Dark,” the duo captures the discrete intimacy of an internment camp romance while underscoring the injustice of Executive Order 9066, which resulted in the incarceration of some 120,000 Japanese Americans during World War II.

There is also recognition that history is complicated. In their work, No-No Boy commemorates the Japanese Americans that served in the U.S. Armed Forces during World War II as well as those who refused to serve while their families remained incarcerated behind barbed wire.

The current political climate that propagates the persecution of “the other” has brought about a renewed urgency to ensure these stories of incarceration are remembered so mistakes aren’t repeated.

The No-No Boy Sept. 29 performance at MBT will start at 7 pm. Tickets are available through Eventbrite (click here) ore contact the MBT office at office@mbtchicago.org or 312 943 7801

FacebookPinterestEmail
We use a podcast library service to publish our Dharma Talks here and on iTunes. If you are interested in past talks you can browse our Dharma Talk Archive.