What kind of temple are we? 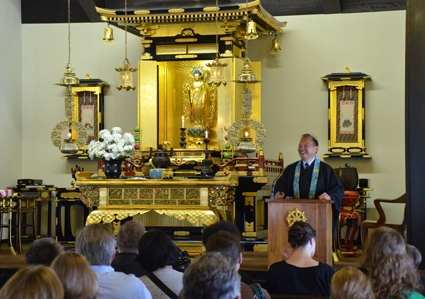 The first appearance of Jodo Shinshu Buddhism in the United States is traced back to Japanese immigrants who initiated a gathering of Buddhists in San Francisco on July 14, 1898. The Buddhist Churches of America, which with the Midwest Buddhist Temple is affiliated, is rooted in the Jodo Shinshu tradition.

Between 1900 and 1940, many Jodo Shinshu temples were founded along the West Coast of the United States. But it wasn’t until 1944 that the Midwest Buddhist Temple was founded in Chicago by Rev. Gyodo Kono—its beginning linked to the “resettlement” of many Japanese-Americans who moved to the Midwest to start new lives as World War II came to a close.

Rev. Kono, was one of the dynamic issei (first-generation Japanese in America) Jodo Shinshu ministers who helped establish Buddhism in the United States. During World War II, he, along with thousands of individuals and families of Japanese descent (most were U.S. citizens), were sent to relocation and internment camps in remote locations of rural America. Following his release from the Rohwer Arkansas Relocation Camp, Rev. Kono moved to Chicago where he found many issei and young nisei (second-generation Japanese-Americans) also just released from the relocation camps.

These “resettlers” had been forced to make a difficult choice: Remain in the camps and await permission to return to the West Coast, or gain release under the condition they relocate to the eastern part of the United States.

Many chose to start a new life in Chicago.

Rev. Kono and other issei and nisei leaders saw the need to establish a place where “resettlers” could gather for Jodo Shinshu services, as well as find a much-needed sense of community. Rev. Kono held the first service of the Midwest Buddhist Church (later renamed the Midwest Buddhist Temple) on July 10, 1944 at the South Parkway Community Hall on Chicago’s South Side.

Attendance grew quickly, Sunday Services were moved to the larger Uptown Players center on North LaSalle Street. The Uptown Players location was destroyed in 1946 when a fire broke out on the eve of the Hanamatsuri celebration (the birth of Buddha). Church activities then moved to the Olivet Institute on Cleveland Avenue in the Old Town neighborhood.

In the four years following its founding, temple membership grew steadily and plans for a permanent location were established. In 1948, the Midwest Buddhist Church purchased a three-story building at 1763 North Park Ave.,  and after significant renovation, the first permanent location of the Midwest Buddhist Church was dedicated in September 1950.

It was at this location that the Midwest Buddhist Temple held the first Ginza Holiday—a three-day food and cultural festival that has continued each August to this day. Also at our North Park location, our annual Bon Odori, a festival of dance to honor departed family members, took place outdoors for the first time under the night sky with traditional lanterns lighting the street.

Through the 1950s and 1960s, membership continued to grow. Young families established a thriving Sunday School, and interest in Buddhist teachings began to grow beyond the Japanese-American community. Foreseeing an evolving need of the temple’s offerings, the membership began an effort to build a new facility that could accommodate all of the temple’s activities and provide space for cultural and Buddhist educational endeavors.

Twenty-seven years after the founding of MBT, we dedicated our new Temple of Enlightenment on Nov. 6, 1971. Our temple, designed by architect Hideaki Arao, is located at 435 W. Menomonee St. in the Old Town neighborhood of Chicago, just blocks from our original North Park location. Our temple, with its striking architecture, is now an integral part of the Old Town community, and the tolling of our kansho (large bell) that heralds the start of Sunday Service, is a familiar sound.

Over these many years, 12 other ministers have served our temple—each providing thoughtful guidance through many years of change. In 1975, our founding minister and spiritual leader, Rev. Gyodo Kono, passed away. A sculpture of his likeness was commissioned upon his passing and is located prominently in our hondo (chapel).

In July 2014, the Sangha (temple membership) marked the 70th anniversary of MBT’s founding and, to acknowledge the generosity and hard work of our issei and nisei, dedicated the temple’s beautiful new Legacy Garden. The Japanese temple garden, on the east and west frontage of our temple, stands as a tribute to our founders and provides a sanctuary for peaceful contemplation.

If you visit our temple today, you may notice that, while the temple has roots in Japanese-American culture, MBT enjoys a growing diversity. Our nisei have always reminded us to look to the future, and this enriching change in the faces of our membership will help sustain the Midwest Buddhist Temple for generations to come.

Who are we? We Are MBT