I would like to share a few thoughts about an historic experience that I had on June 22–28, 2015. I was in Rome and at the Vatican, participating in a Catholic Buddhist Dialogue upon the request of Pope Francis. The meeting was sponsored by the Pontifical Council on Inter-Religious Dialogue.

In the past, the Catholic Buddhist Dialogues were for scholars and academics. This time, the pope wanted community leaders to participate. Further, he asked the U.S. Council of Catholic Bishops to organize Buddhists and Catholics in America, so that we would have a common, single language.

In addition to me, Rev. Patti Nakai of the Buddhist Temple of Chicago, Asayo Horibe of the Buddhist Council of the Midwest, Venerable Abbotess Man Pou of the Fo Guang Shan temple in Naperville and Aarti Tejuja of Sambala-Chicago were invited from Chicago.

Others invited included Rev. Ron Kobata of the Buddhist Church of San Francisco and Bishop Noriaki Ito of the Los Angeles Higashi Betsuin.

Altogether, there were 45 official delegates who represented Buddhists traditions from Sri Lanka, Thailand, Taiwan, Korea, and Japan. Among the Catholics, there were parish priests, diocesan leaders, monastics, lay people from St. Vincent de Paul and Our Lady of Pompei Shrine. So the mix of people was very diverse.

We were housed at the Focolare conference center in Castel Gandolfo, the village where the summer palace of the former pope is located. Castel Gandolfo is about 25 miles outside of downtown Rome, in the hills around Lake Albano. So, it was about 10 degrees cooler than in Rome—fortunately.

The theme of the dialogue was “Suffering, Liberation and Fraternity.”

On Tuesday, Thursday, Friday and Saturday, we had a series of presentations and discussions on various aspects of the dialogue’s theme. It was quite educational for me to learn not only the Catholic view of the world, but also how other Buddhists view the world.

There were panels and presentations about Suffering (dukkha). Suffering is not the right word but is the usual translation of dukkha. So, it was a time to go back to the basics and to examine the real human condition. We came to see that we are all one world, and we only have one planet to call home. So whether one is a Catholic or a Buddhist, there is the human desire to be free of dukkha-Suffering.

All of the participants were able to agree on a common statement resulting from our weeklong dialogue. We were all able to realize more clearly that peace and cooperation is the only path forward for the survival of our planet.

And then, on Wednesday, the group went to visit the Vatican. And, perhaps characteristic of this pope, he insisted that not only all the official participants attend, but also all the spouses and observers, and some of the Conference Center staff. The four staff workers who joined this visit were probably the most thrilled.

We went by bus to the Vatican in Rome, parking in some underground garage, then walking to the official audience room. After about a 20-minute wait, Pope Francis entered and said a few words in Italian, which were translated into English. Then, he greeted each of us and shook our hands as we each presented him with a small gift. It was quite impressive to meet the pope, the leader of more than 1 billion Catholics worldwide.

My impression was that he was a humble and gentle person—and very personable. He looked each person in the eye before shaking hands. He has a sense of being very sincere and concerned about the whole world and, thus, the good relationships with other religions is a sincere wish.

As you might have heard, Pope Francis is making global climate a Catholic concern. He calls it “Care for our Common Home.”

During our breaks and rest times, I was able to talk informally to many of the Catholics, and I got the impression from them that this pope is a bit unpredictable—in a good way. He likes to carry his own luggage when traveling, and he did not want to live in the Papal Mansion and chose, instead, to live in a small apartment in the lodge for visiting cardinals. And, of course, we have heard a great deal about his wanting to care for the poor and disadvantaged.

On Sunday, after our last breakfast, most of us started to make our way back to our homes. But I spent one day in Rome to see a few sights. In particular, I wanted to see the Colosseum and the Roman Forum. The Forum, or more exactly, the ruins that were the Roman Forum, was very important to me as a student of history.

But, before doing my sightseeing, there was one more thing that some of our Catholic-Buddhist group participated in: a “One Earth One Human Family” march that brought together Catholics and other Christians, followers of non-Christian faiths, environmentalists and people of goodwill to call for bolder climate action by world leaders. So, about six of the dialogue participants—both Catholics and Buddhists—participated.

After making our way through the streets of Rome, the march ended at St. Peter’s Square, where the pope delivers each Sunday a short speech followed by the Angelus prayer and Apostolic Blessing.

When the pope mentioned the marchers and the concern about the climate, there was a big cheer and green paper leaves were waved. The organizers were smart and brought extra “leaves,” which people waved throughout the square, magnifying the numbers that actually took part in the march.

We took some small steps to move forward in global understanding. 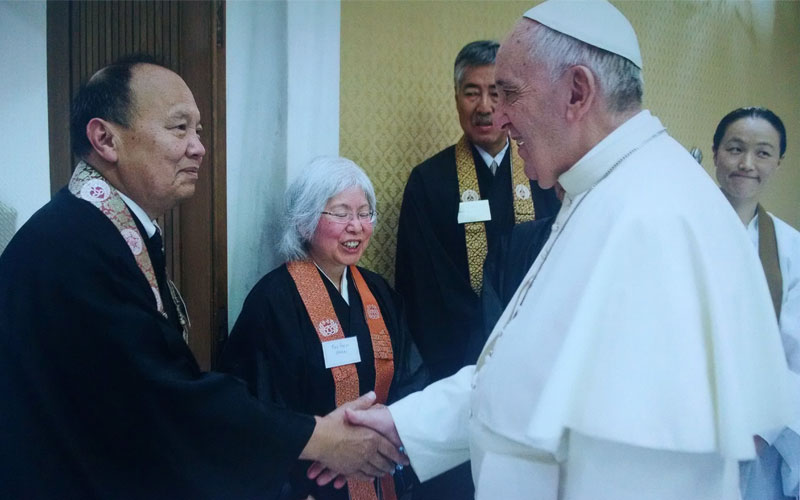 (Photograph provided by the Vatican)