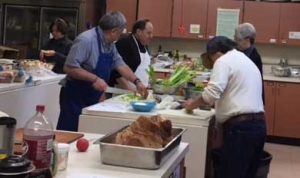 On Dec. 24, around 20 adults and children helped cook an elaborate dinner and fill gift bags for Sarah’s Circle, a women’s shelter in Uptown.

Our dinner menu consisted of turkey, ham, stuffing, gravy, mashed potatoes, candied sweet potatoes, green bean casserole, Huli Huli tofu and salad. The kitchen was bustling with people cutting vegetables, while the turkey and hams were in the oven and potatoes were boiling on the stove. The Social Hall had all of the items lined up for the gift bags to be filled.

Later, several children filled the 50 bags with stocking stuffers and holiday cards made by the Dharma School students.

So many Sangha members and friends donated an innumerable amount of items for this event. We received bags and boxes of stocking stuffers and more than 50 wrapped gifts to be handed out to the women, as well as monetary donations.

It took a few trips beforehand and three cars to deliver the food, passengers and the rest of the items to Sarah’s Circle. As we set up the many containers of food (which could barely fit on their counter), the women were in awe of all of the different dishes. The residents of this shelter are women of all ages from young adults to senior citizens. They have each suffered major changes or losses in their lives but are now living in a safe environment.

After each woman was served (many came back for seconds), the MBT volunteers filled their plates and sat down at the tables to talk with them. It can be awkward at first but, after all, we are all just human beings. Some women talked about their past, others asked about Buddhism and others talked about how delicious the food was.

There were hundreds of donated homemade cookies, several cakes, pies and many other desserts. All of the women were overwhelmed by the generosity of our members. It was heartwarming to see that we may have brightened their lives for just one evening.

Also, since so many items were graciously donated, we will take any that were left over with food, blankets and other warm clothing to tent cities and other areas starting in January.

An enormous thank-you to all those who donated items, gifts and desserts, and to those who helped on Dec. 24. Your participation expresses the true meaning of Dana (selfless giving without expectation of anything in return). Namu Amida Butsu.