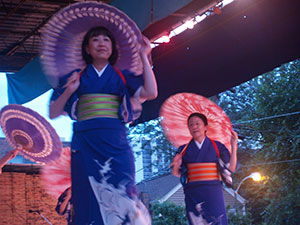 Minyo is a genre of traditional Japanese folk music and dance that originally was sung and danced as people worked, the rhythms synchronizing and easing the labor physically and mentally. In addition to representing regional occupations (harvest dances, fishermen’s and coal miner’s dances), minyo dances and songs also represent celebrations and legends of Japan.

The Midwest Buddhist Temple Minyo group, started in July 1965 by the temple’s nisei, or second-generation Japanese-Americans, has kept this style of Japanese folk dancing alive at the temple and devotes many hours of practice to lead MBT’s annual Obon Odori and to perform at its Ginza Holiday Festival.

In 1966, Tsutomu Matsuda of Tokyo, a minyo master and founder and president of the Nippon Genchi Minyo Hozon Kai, paid his first visit to Chicago. Through minyo, Mr. Matsuda enabled his students to appreciate and become more aware of their Japanese cultural heritage.

Michiko Ichikawa, who led the MBT Minyo Group since its inception, was presented with a teaching certificate by Mr. Matsuda during his 1981 visit to Chicago. Mrs. Ichikawa accepted the honor and certificate on behalf of the MBT Minyo members as a tribute to the group’s efforts to foster minyo. In recent years, many of the nisei members of the group have retired and a younger group of dedicated dancers has emerged.

For more information on the Midwest Buddhist Temple Minyo Group, please contact the temple office at office@mbtchicago.org or call 312.943.7801.